I’ve been working pretty flat-out on other uni assessments since my last update, however, I was able to find the time to take both Samurai Showdown and Small Gods to the Perth Games Festival and (attempt to) showcase them both to the public. I’ve actually been to previous Festival’s as part of the Murdoch student showcase that they do there every year, however unlike last year’s visit which was solely so that I could pass a unit, this time around I put significantly more importance on people’s experiences and feedback as Samurai Showdown has turned into a properly commercial venture and so a great deal more rides on it than ever did on my past work.

This year I once again went as part of the Murdoch showcase and so in exchange for equipment and a space at the event, I had to hand out Murdoch branded items such as puzzle panels and wristbands —the latter of which I gave away so many I was only able to steal one for myself 😦 :P. It was still a pretty good trade, though, as I meant that I didn’t have to worry about bringing anything with me to the event and all the setup was basically done by the time I arrived. Despite this, however, there were some unfortunate technical issues that meant that I was unable to show off Small Gods and so I wasn’t able to get any of the feedback I was hoping for. Anyway, without further adieu, let’s talk about what it was like at the Perth Games Festival!

The event itself was incredible, as far as I’m concerned. While there appeared to be fewer people at this year’s festival when compared to last year’s, that just meant that those presenting their games weren’t being crushed by the crowd and that the general public could actually stop and play a game or two much more easily. It ended up greatly improving both the amount of feedback we received and the quality of said feedback, as we could A) hear what people were saying over the noise of the crowd around us and B), no one felt pressured to move on as soon as possible so they were able to put more thought into what they wanted to say to us, and also had the time available to write in the questionnaires provided.

The Murdoch stall was also brilliant this year, too. While there were more student groups showcasing their games than there had been in previous years, the stall we had was approximately three-quarters of the length of the hall and so we were able to fit all the hardware and people in quite easily. It was also positioned in a significantly better location than it had been in previous years with the stall being the first thing anyone saw when they walked into the festival. This made it utterly impossible to miss and, in my opinion, resulted significantly more people visiting my game than would have if the showcase was in the same location as last year’s (I.E on the opposite side of the hall from the door and hidden behind a dividing wall) This is entirely thanks to the fact that the university recently became the platinum-level sponsor of the event —thanks to the efforts of my lecturer, as I understand it— and so I’m very glad that I was lucky enough to have this happen.

The early morning crush and our, at the time, unusable machines .

As mentioned previously, however, some annoying technical issues that somewhat marred the event for a time and which prevented me from using the day as effectively as I possibly could have. This issues were brought about due to the way in which Murdoch handles computer security —several of the computers we brought lacked wireless internet and they require a special login when taken away from the Murdoch network— and the fact that we were unable to login to our machines as the password we were provided with was out of date. As a result of this, we were unable to check if our games were all working correctly until roughly half an hour after the doors had opened to let the public in and even worse than that (and that’s a significant issue as something always end up breaking), no one could play our games!

Luckily, however, we were eventually able to get the right password and once we did the crowd swarmed the Murdoch stall pretty much immediately. Small Gods, however, proved to be a no-show as the Oculus Rift needed to be setup before the event and an internet connection is required to do so. As I couldn’t log in for the first half hour or so, and as the PC it required to run the device lacked a wireless connection anyway, I ended up being completely unable to show the game to anyone at all and so wasn’t able to get any feedback on my ideas for it. 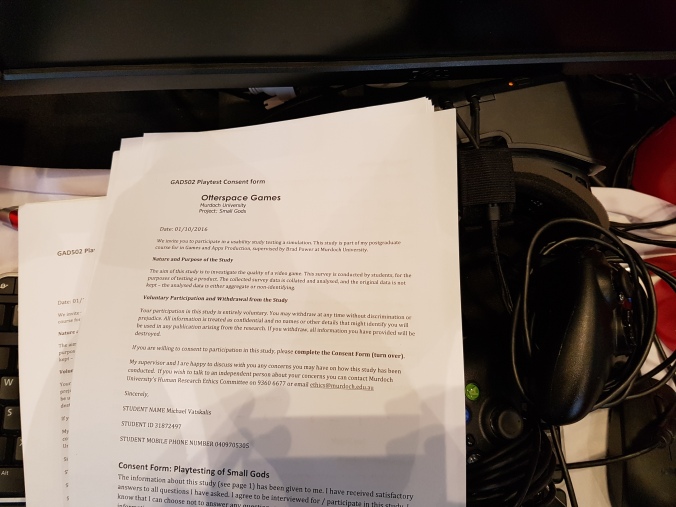 I ended up getting something like 20-30 questionnaires filled out by people who played Samurai Showdown!

While I haven’t had a chance to really pour through what was said and the scores that people assigned to the game’s various aspects, the overall impression that I gathered via word of mouth appeared good. People seemed to really enjoy the simplicity of the gameplay combined with the challenge that being pitted against their friends brought. While some people had a lot of trouble using the controls due to the fact that I was using Xbox controllers and they were used to PlayStation controllers, you could almost plot how much better they were getting at using the controller as the time difference between players kept dropping as they played. on the whole, the feedback I received seemed really positive and so I’m certain that I’m on the right track in regards to what I’m doing and so the planned 2017 release is looking good!

In fact, my favourite piece of feedback that I received was from a little girl who wrote: “It’s easy but also hard and fun.”

While that probably doesn’t seem like the most descriptive feedback ever, it tells me that she found it easy to learn, hard to master, and above all else, fun to play. I may be a little biased, but I think that’s great news as it means that everything is going as planned! 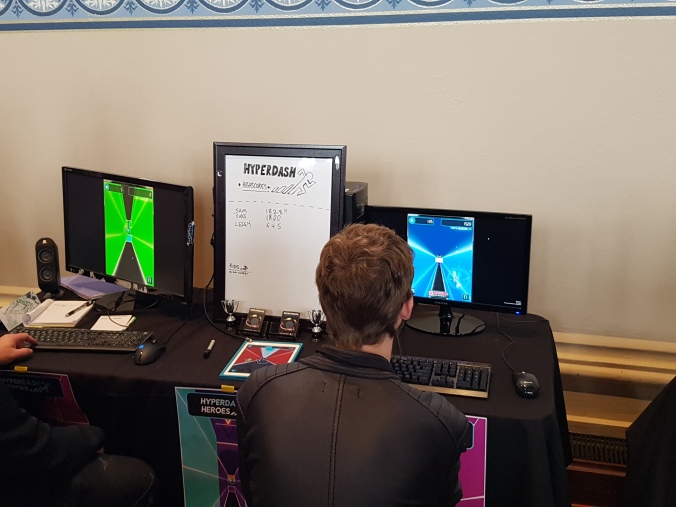 Another cool think that happened at the PGF was that I was able to speak to some journalists from GameCloud again! While we weren’t able to get into very much detail at the time thanks to my having to constantly go back and forth between them and the people playing my game, they emailed me a list of questions after the event and I was able to write ~2000 words back (uni has taught me how to waffle endlessly in case you haven’t noticed :P). The article should appear sometime in the next few weeks, and when it does I’ll be sure to include it in my next dev blog. Speaking of which, my next dev blog should be appearing soon(tm), so look forward to that!

Going to the Perth Games Festival in a slightly more serious capacity than last time was a great experience. There was a lot of stress before the event even started thanks to the aforementioned technical issues, in addition to the imposter syndrome  that I always end up getting, but I wouldn’t have traded the experience for anything. As mentioned before, I’m looking to produce another dev blog on Samurai Showdown within the next few days/weeks (university allowing), and I’ll also be posting some cool news about official T-shirts and my fancy business card designs.